This month’s centenary of WWI has put the conflict back in focus. But what about the greater disaster which started in 1918?

In the UK, the mythology of the war has a long development which has slowly expanded to include discussions about trauma, conscientious objection, and the racist attitudes of various sides. (See the November 13th episode of podcast The Europeans for some introductory information of treatment of non white soldiers and labourers).

Lesser known is the Spanish Flu pandemic, which in my history class was barely mentioned. It lasted from 1918 to 1920 and wiped out between 2.5% to 5% of the world’s population (the huge margin shows how much epidemiologists still do not know). Last week I picked up Laura Spinney’s book Pale Rider which gives an great overview for dummies like me who knew nothing about the extent of this “Spanish” tragedy.

The flu was not a result of the war but the mass movement of people surely intensified its spread and the consequences. Tragically, it had the worst mortality rates for adults in the prime of their life, and often killed recently returned soldiers – whatever your view of the war, these deaths could not be seen as glorious. There were no memorials for these men, women and children.

Why Spanish? The flu almost certainly did not come from Spain, but the journalism did. The country, being neutral in WWI, was the first to allow wide reporting of the illness. The rest of Europe, unable to know the full extent of the flu in their own towns and cities, assumed the sickness came from Spain. The Spanish called it “The Naples Soldier”, after a catchy song of the time (get it).

Applying distance and stigma to the flu echoes the naming of many illnesses throughout history – such as syphilis, which was called the Spanish/French/German/Italian/Polish disease – depending on where you lived.

Also this week I learned that the Spanish dub of Terminator changed “hasta la vista” to “sayonara, baby” which to me makes him sound like that Simpsons character Troy McClure. You might remember him from such self-help videos as “Smoke Yourself Thin” and “Get Some Confidence, Stupid!” 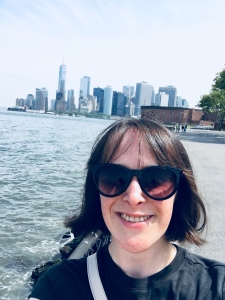 I am a language enthusiast and EFL teacher with good German (C1) ok Spanish (B1) and a random collection of words from other languages. Will not shut up about: history, literature, comedy, culture and dogs.